Are There Air Marshals on Every Flight?

Air marshals or sky marshals, whatever you like to address them as, are not seen on each flight. Seeing one red-handed is fairly a rare chance and the possibility of boarding one on the same plane and identifying them is purely coincidental.

Air marshals travel on purpose, unlike Israel’s flag carrier El Al Airlines which boards an air marshal for each trip, usually they do not take part in each flight unless something amiss is suspected.

But if someone wants to spot one, you will have to be in their own shoe for a while. Here is how you can do it and make your next flight super interesting.

Who is an air marshal?

Air marshals are simply law-enforcement officers who work for the Transportation Security Administration (TSA) which is an agency under the United States Department of Homeland Security. The ultimate goal of having an air marshal on board is to safeguard the passengers, crew, and airplane from vicious acts.

Federal Air Marshal Service took its first leap in 1961 with the prime intention of fighting against aircraft hijackings. As such incidents were extremely rare, the number of federal air marshals remained to be very low- 33 at the time of the 9/11 attack. Before 1970, an air marshal program was only active in the U.S., Russia, Israel, and Ethiopia using armed air security officer(s) to protect civilian passenger aircraft.

When to expect federal air marshals on your flight?

This is something no one can know unless having any connection to the law enforcement. TSA evaluates domestic flights and international flights against a risk matrix and decides whether air marshals are required or not. According to the airlines, they are instructed to keep two seats open to accommodate air marshals if they should board a particular flight.

How many air marshals are working for the TSA?

The U.S. carriers operate their fleets on thousands of domestic and international flights daily. Additionally, more than 5,000 public airports all around the U.S. become busy with passengers. Stuffing each flight and airport with air marshals is a highly unrealistic task.

Facts such as how many air marshals are working and their identities are concealed from the public to avoid unnecessary exposure of vital information.

There are only around 3,000 air marshals working around the clock across the U.S. Hence, TSA identifies potential threats associated with each flight and deploys air marshals to ensure the safety of the related flights.

How to spot an air marshal?

Spotting an air marshal is not easy as someone thinks, they are trained to remain unidentified and they are pretty good at it! Normally sky marshals do not board an airplane with their fancy badges and uniforms, but are dressed like usual passengers. Here is what to look for in your air marshal hunt.

Air marshals are not excited about flying any longer – a flight is just a daily task they undertake. Hence they do not board along with the flight crew but wait till the last minute. In most cases, they wait at the gate like a normal passenger while supervising the boarding process to identify potential threats in the first place.

Last-minute boarding – even minutes before the plane departs – is considered one of the most significant characteristics of an air marshal.

2. Not accompanied by hefty luggage

Air marshals do not carry an arsenal with them, they carry only a handgun with handcuffs. Someone who looks like a regular passenger with only a backpack qualifies to be an air marshal. But never be too quick to judge, it could be a usual traveler who does not like traveling with a heavy suitcase.

3. Usually takes a seat at the back row

When the federal air marshal service first began, air marshals sat in the first class. Eventually, they were moved to back to allow more room for better surveillance all over the passenger cabin. An aisle seat at the back is ideal for overlooking the entire cabin: flight attendants grappling with the drunk and unruly passengers are clearly seen from the aisle seat in the last row. 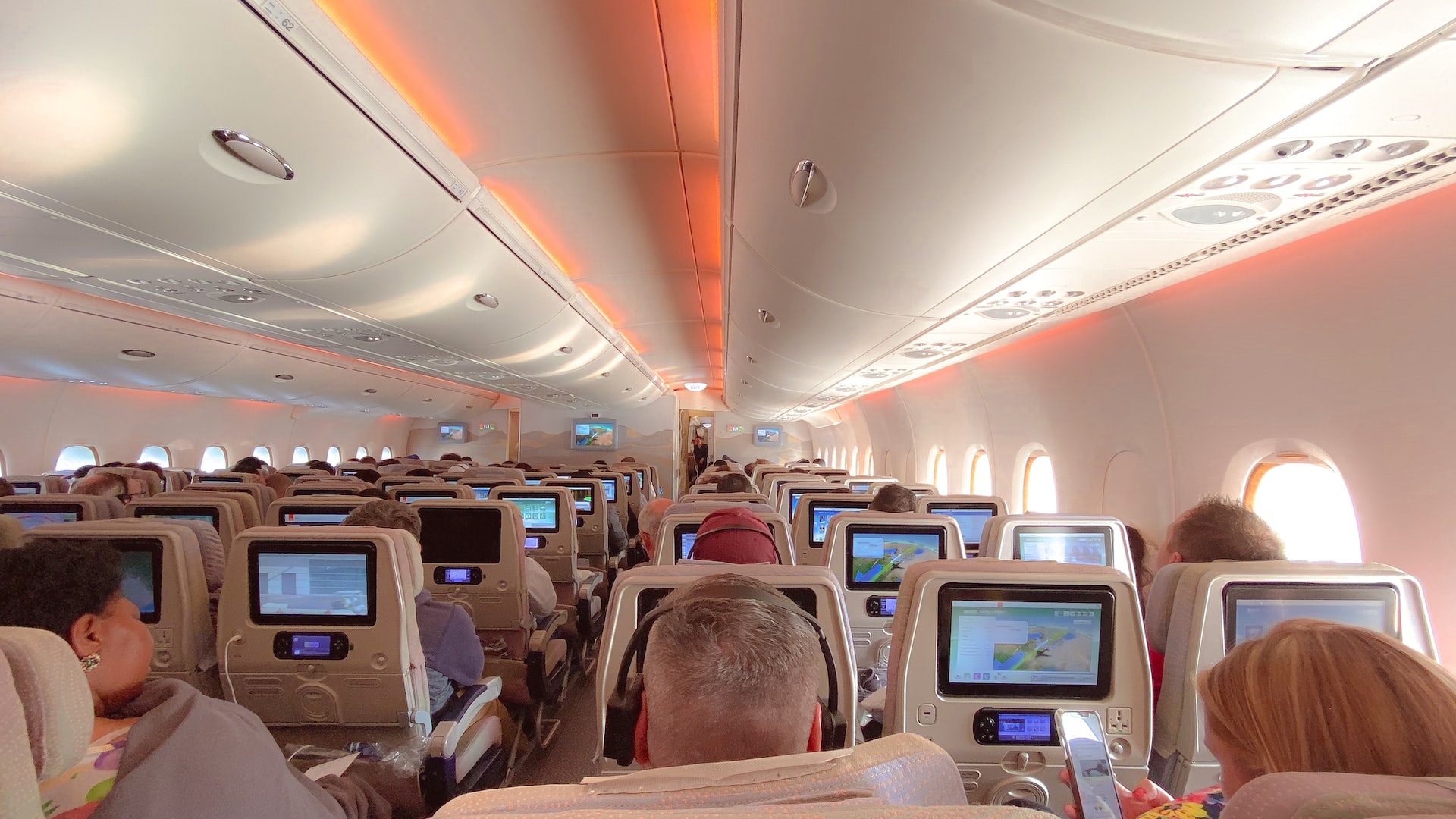 Air marshals are trained to identify passengers who are nervous, stressed, and avoiding eye contact. Moreover, an air marshal is capable of pinpointing a drunk passenger solely from body movements. Once identified, they lock on to them and continuously monitor for spurious behaviors.

Carrying firearms onboard a commercial aircraft is strictly prohibited and if air marshals found any armed passengers, they have the ultimate right to arrest the respective passengers without a warrant, even inflight regardless of the overflying state.

5. Be a companionless traveler

The vigilant, yet calm person who boards with extra-small luggage and walks down the aisle to the economy class scores more points to be an air marshal than usual TSA agents with full gear at the gate.

6. Saying no to catnaps

An air marshal’s job is to be vigilant but to let on like minding own business. An air marshal is supposed to stay awake during the entirety of the flight. As most domestic flights will last for a couple of hours while many international flights even stretch up to 12 hours, staying up is extremely challenging. On some long-haul or red-eye flights, two or more additional air marshals are carried as relief officers.

Flight delays are painful for passengers and flight crew (indeed!), but air marshals hate to hear delays as it jumbles their work schedule. In most cases, air marshals remain undercover on the return trip as well. A flight delay will entail more complexity in their duties.

In the early days of aircraft protection operations, air marshals were given a uniform. Eventually, authorities understood that a uniform creates unnecessary outcomes such as creating unwanted fear among passengers and revealing the identity of the air marshals. Being undercover is of utmost imperative, as if the identity is revealed, the air marshal will be the first victim of an attack by the ill-wishing passengers.

But, if you look closely, air marshals tend to wear clothes that do not match the conditions. Sometimes, they dress for a flight taking off from a warm climate and lands in a cold region, and he has to return with the same clothes, which makes his clothes unflattering. This is another key point to differentiate an air marshal from other passengers.

Look for these behaviors as well

If you tick most of the behaviors below, presumably you are making progress through the ‘spot an air marshal’ crash course! 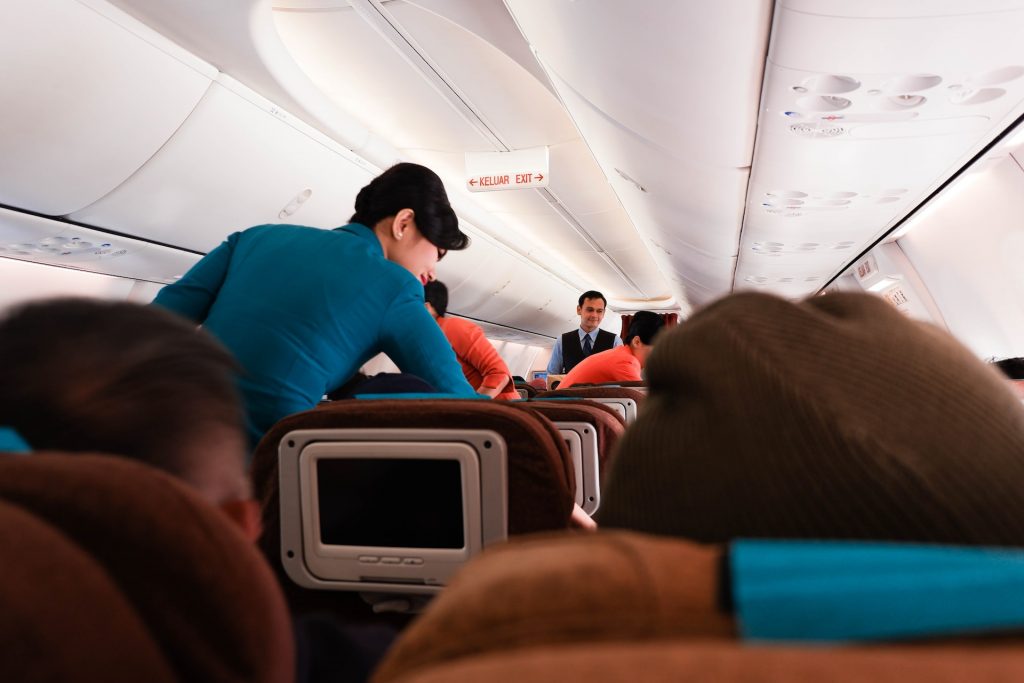 Is it the same air marshal who accompanies prisoners?

The short answer is no. An air marshal or a sky marshal is someone who travels on a plane to provide security and work at airports. What you have seen in movies are U.S. marshals escorting prisoners. A U.S. marshal is a law enforcement officer working for the United States Marshal Service which is a bureau operating under the U.S. Department of Justice.

One last thing to do!

Hence, they want the piece of mind to concentrate on their job. Even if you detect an air marshal, never reach out to them to talk or inquire from a flight attendant, they might be more scrupulous about you, and secondly, that causes inconvenience for them.

Enter your email and get curated content straight to your inbox!

Thank your for your subscription.

You are already subscribed to this newsletter.

Eglė Bartaševičiūtė
A passionate traveler and an avid aviation enthusiast bringing you the most well-founded, accurate and up-to-date industry content.

What Does a Gate Agent Do?

Although a gate agent's job might seem like a self explanatory position, it entails a lot more than you can imagine.

Is the Airport Busy on Christmas Eve?

Travel during the holiday season may be daunting. As if the winter holidays aren’t stressful enough, many people also have to fly during the busiest week of the year. It is no wonder many travelers plan out their trips well in advance in an attempt to avoid the major rush. With Covid-19 no longer being […]

It is no secret that the aviation industry is under constant threat. In recent years, we have seen a rise in terrorist activity targeting aircraft and airports.

Some of them are essential, others are optional. Learn more